How to capture great footage with your Video VBOX

Now you have your Video VBOX, you'll want to capture some great footage when you are out on track. We have provided some hints and tips here to ensure you get that great footage, everytime.

These principles are designed to be as easy to follow as possible so setting up your Video VBOX is effortless. 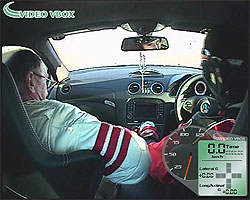 Mount the forward-facing camera as far forward as possible – this avoids the 'letterbox' effect as seen below. This helps you see more of the track (the reason you bought the Video VBOX!) rather than the cockpit:

However, if the camera must be mounted further back in the car, you should consider using one of our 54º lenses. You can purchase one from our online shop for £12.00 (inc VAT). 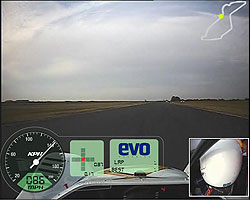 When positioning the camera, don't forget point the forward-facing lens towards the track, this way you won't capture too much sky. 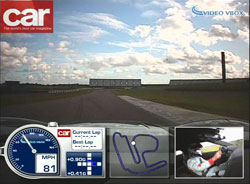 Another reason to mount the front camera facing slightly down is that it provides you with a view of the car bonnet, which is a non-dynamic part of your video; but it makes a perfect background to the graphics, which are dynamic:

This video was shot in a Corvette, and the profiled front looks good. Perhaps a little too much sky in this one though. 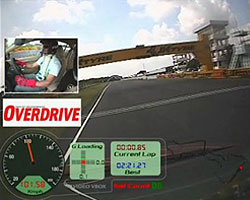 Always remember to mount the camera straight – this is critical for capturing footage that you'll want to view afterwards. If your camera isn't straight, your video can look like this:

This particular example was a great video clip showing some exciting stunt driving but it was rather spoiled by the slanted camera angle. 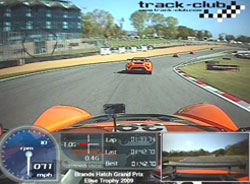 Let's take a look at this screenshot, taken from a video at Brands Hatch (video here).

There's a lot here that is really great, such as the camera position – see how most of the screen is taken up by the track - where the action is.

The bonnet of the Lotus is being used as a background to the graphics; the logo (top right) is bold enough to see without it taking over the whole screen.

However, we could make some suggestions to make it even better.

The position of the picture in picture (it's looking back) is over the top of the driver. The dial, which should be recording RPM but is recording current MPH, is translucent and could have been swapped with the rear facing picture-in-picture so you could see the driver at work. To many drivers seeing driver steering angle or gear changes is as important as watching the car's behaviour on track.

Further improvements could be made by moving the track map so it avoids the edges of the screen, and adding some boldness to its colouring would help the driver see the track and their position more clearly. 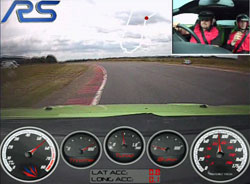 Can you see the track map? No... all you can see is a red dot moving around a cloudy sky. White isn't a good colour for a track map, especially in these climatic conditions.

Give consideration to the colours you use, especially for 'floating' text elements. Red and blue don't work well on their own, so when setting up something like a lap timing element, either choose a colour that 'floats' well, like orange; or use the Simple Shape element as a background. 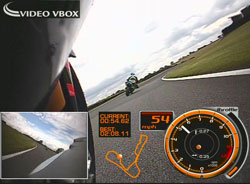 Examples of both are seen here:

On this screenshot the low camera position proves for some very effective 'tarmac rush' – you might want to consider doing something similar if you are using a motorbike. A great position for the camera mount is in the front grille. 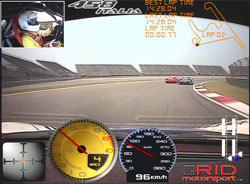 The floating text in this one works too - It's very clear to read and is executed well.

Regardless of the progress made, the driver will enjoy watching this back.

The element ranges relate to items such as setting up the speedometer, RPM levels and G force readings. When considering your elements, you will need to be considerate and realistic with what your car is capable of. 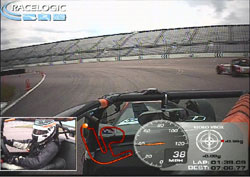 For example: A Caterham Academy car is unlikely to be able to generate more than about 1.2g of lateral acceleration, so in this scenario you wouldn't need a double bar graph or XY plot set to a range of, say, +/- 2g – as the dynamics will be lost.

It is better to set such elements with ranges that match or are slightly lower than the car's capabilities, especially if there is a digital readout to back it up:

As you can see the above screenshot is from a Caterham race car. The XY plot has been set to a range of +/- 1g – this ensures that the marker constantly swings over the background, whilst the text readouts next to it give exact information. The speed dial has also been set to a very realistic maximum of 120mph. The driver here understood his car was not capable of doing 200mph. By maximising the speedo to 120mph, the needle will reach a good proportion of the dial. If you left the dial at 200mph, all you'll see is the needle slowly move up the dial. By being realistic of your car's abilities, you'll get much more representative data.

If you are designing your own graphics, they should be created in a fairly bold fashion – very subtle shading and one pixel-wide lines will not show up perfectly in your video. Give thought to the font size used – as a general rule a font size lower than 12 point isn't advisable (though this does depend a little on the font itself).

Outside noise can disrupt your video. Avoid wind noise whenever possible.

If you're driving a road car with an element of refinement and sound damping to it, it can be a good idea to set the ALC Sensitivity (in the setup software "Audio" settings section) to medium or low – this helps to mitigate extra sound events like hitting the rumble strip coming into the cabin. In a race car it shouldn't make any difference as the noise levels are evenly loud.

Be careful with mounting a microphone in the engine bay – the proximity to clattering mechanics is often not as nice to listen to as you'd imagine. If at all possible, the best area to place the microphone is next to the exhaust which tends to produce the most exciting audio.