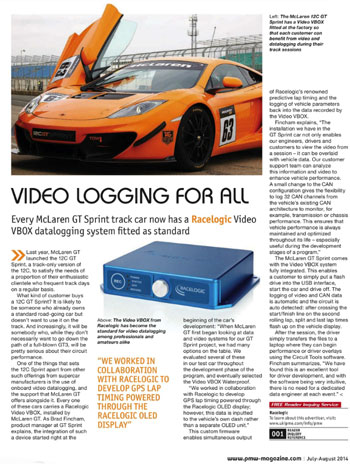 Video Logging for all

Last year McLaren GT launched the 12C GT Sprint, a track-only version of the 12C, to satisfy the needs of a proportion of their enthusiastic clientele who frequent track days.

What kind of customer buys a 12C GT Sprint? It is likely to be someone who already owns a standard road-going car but doesn't want to use it on the track. And increasingly, it will be somebody who, whilst they don't necessarily want to go down the path of a full-blown GT3, will be pretty serious about their circuit performance.

One of the things that sets the 12C Sprint apart from other such offerings from supercar manufacturers is their use of onboard video data logging, and the support that McLaren GT offers alongside it. Every one of these cars carries a Racelogic Video VBOX, installed by McLaren GT.

As Brad Fincham - Product Manager GT Sprint - explains, the integration of such a device started right at the beginning of the car's development:

"When McLaren GT first began looking at data and video systems for our GT Sprint project we had many options on the table. We evaluated several of these in our test car throughout the development phase of the programme, and eventually selected the Video VBOX Waterproof."

"We worked in collaboration with Racelogic to develop GPS lap timing powered through the Racelogic OLED display, however this data is inputted to the vehicles own dash rather than a separate OLED unit."

This custom firmware allows for simultaneous output of Racelogic's renowned predictive lap timing and the logging of vehicle parameters back into the data recorded by the Video VBOX:

"The installation we have in the GT Sprint car not only allows our engineers, drivers, and customers to view the video from a session - it can be overlaid with vehicle data. Our customer support team can analyse this information and video to enhance vehicle performance. A small change to the CAN configuration gives the flexibility to log 32 CAN channels from the vehicle's existing CAN architecture to monitor, for example, transmission or chassis performance. This ensures that vehicle performance is always maintained and optimised throughout its life – especially useful during the development stages of a programme."

The McLaren GT Sprint comes with the Video VBOX system fully integrated. This allows a customer to simply put a flash drive into the USB interface, start the car and drive off. The logging of video and CAN data is automatic and the circuit is auto detected: after crossing the start / finish line on the second rolling lap, split and last lap times flash up on the vehicle display.

After the session, the driver simply transfers the files to a laptop where they can begin performance or driver overlays using the Circuit Tools software.

"We have found this is an excellent tool for driver development, and with the software being very intuitive there is no need for a dedicated data engineer at each event."